The 43rd AGM of the Kingston Village Hall Management Committee was held on 19th September 2019, with friends of the Hall attending as well as committee members.

Minutes of the meeting, together with the Chairman's and Treasurer's Report can be downloaded by clicking here

• One large and one smaller hall

Weekly "Wellness workout" classes, suitable for adults of all ages. Core workout, weight-bearing exercise and beneficial stretching every Tuesday at 10am and 6.30pm in the Village Hall (drop in, £6.50 per session). These are being run by Jacqueline Smith of The Barn. 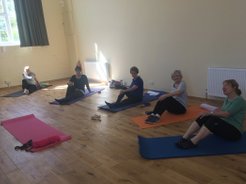 Completed:  painting of the exterior woodwork; work on the south garden; repairs to courtyard fencing; replacement of the tarmac area with a surface suitable for play (funded by Kingston Parish Council), with the addition of a new hopscotch pitch (funded by South Cambridgeshire District Council).

Awaiting installation: sound absorption panels to improve the acoustics in the small hall (funding from the National Lottery Grant Fund).

Following the receipt of our ACRE loan for working capital needs and most importantly the confirmation and signing of the WREN contract, work began immediately. The photographs below show the old floor taken apart and the debris was cleared out.  Having got clear sight of the foundations and the floor, no additional significant project issues were identified, but the joists and floorboards were in a bad state of repair and had to be scrapped. 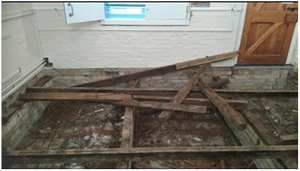 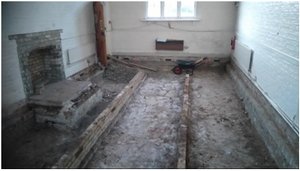 Our contractors quickly got the hardcore in (with help from two Marks, John and Peter) and compacted, followed one week later by the concrete pad.  At a village pub and pizza night we invited everyone to choose the exact type of floor boards from a few previously-costed options, in order to keep everyone involved and engaged. 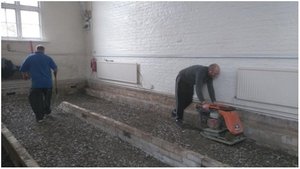 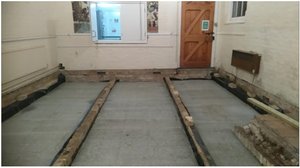 The next stage was to carry out plumbing and electrical work.  The floorboards had to be conditioned at a reasonable temperature before laying, but finally this could be done and the new radiators were installed in early 2018.  We also have a new east window, new curtains, and new tables and chairs giving a cosier cafe-style ambience.

Our village hall is now undergoing an exciting major upgrade, which has been split into several phases. Phase 1 involved improvements to the small hall, including an extension, a new pitched roof, new toilets, a fully-equipped kitchen and a new entrance lobby which is wheelchair-accessible. The ceiling in the small hall is now much higher, giving a more open, airy feel, and we have large storage cupboards for equipment such as chairs and tables. The kitchen is now self-contained, and has a cooker, dishwasher and fridge-freezer, so that meals can be prepared and cleared up.

The project was funded by grants provided by WREN, AmeyCespa, Biffa Award, South Cambridgeshire District Council, The Rank Organisation, and Kingston Parish Council. Other funding has come from various fundraising events in the village, as well as generous contributions from a number of individuals in the village.

Building work for Phase 1 started on 9 February 2015 and was completed in the Autumn of 2015 with a grand opening event.

The Village Hall Management Committee is in overall control of the project, and has been meeting regularly to take decisions and monitor progress. The key people on the committee with specific functions for this project are: