The following flyer is being distributed to every household in Kingston. The text is reproduced below.

Our unanswered questions are here (please click for docx file)

WHAT WE KNOW SO FAR

The East West Rail Company (‘EWR’) has outlined five possible routes for the new railway line between Bedford and Cambridge. All of these ignore the possibility of a northern approach into Cambridge using Cambridge North Station. EWR insist on a route that enters Cambridge from the south to join the King’s Cross line and a new Cambridge South Station. These routes therefore all cut across South Cambridgeshire and will involve major constructions to elevate the railway line.

The five routes from Bedford merge into two suggested options for the Cambourne to The Eversdens section and these will have implications for Kingston. Both options require an elevated construction to cross over the A603 near the Eversdens.

Diagram 1 [EWR routes 2, 6 & 8]: If a new Cambourne South station is built, EWR’s proposed route alignments will bring the railway line close to the northern edge of Kingston, probably on a raised embankment and blocking the B1046 between Kingston and Toft.

Diagram 2 [EWR routes 1 & 9]: If a new Cambourne North station is built, the railway will cross the B1046 between Toft and Comberton. This route will include the construction of an elevated section (proposed embankment c. 10m high) cutting across the top of Caldecote.

WE NEED ANSWERS TO QUESTIONS

Members of Kingston Parish Council have participated in public meetings with East West Rail and submitted questions on behalf of Kingston. These questions remain unanswered.

Ask questions and raise your concerns. We have been clearly told that if the authorities receive few responses, they will assume that communities are in favour of the suggested routes. Now is the time to be heard.

The EWR consultation feedback form can be completed online www.eastwestrail.co.uk

Alternatively, ask a member of the Parish Council for a paper copy of the form and we will post one through your letter box.

The hour long event had presentations from EWR staff on the project as a whole, on customer experience, and some of the issues relevant to the Clapham to the Eversdens section of the route.

Here is a link to a recording of the Public Meeting held to give information and an opportunity for discussion. This was the fourth in a series of locally-focussed meetings; this one looked at the impact of possible routes for the railway on Kingston and its immediate neighbours.

Video recording of Public Meeting - Cambourne to the Eversdens

- presentation by Sebastian Kindersley on behalf of CamBed RailRoad (starts at time point 8.50)

- presentation by William Harrold on behalf of Cambridge Approaches (starts at time point 17.30)

The latest stage of the public consultation process began on 31 March and the public can submit responses until 9 June. The consultation pack will be sent by EWR to each household in the next few days, giving full details of the latest proposals and information on how you can respond. It can also be downloaded here:

In summary, there are five possible track alignments in our section of the route corridor between Cambourne and Cambridge. Three have a station south of Cambourne and would take a southern route along the valley of the Bourn Brook between Kingston and Toft, within 350 m of our church.

However, from our point of view, the promising news is that the other two possible track alignments are away from Kingston and are described by EWR as “emerging preferences”. These have a station just north of Cambourne and the track takes a northerly route to the A428 to Childerley Gate, before turning south to pass between Toft and Comberton, skirting Little Eversden and on to near Harlton and Haslingfield.

Small-scale plans are shown in the consultation documents and we have attached an enlarged sketch of the alignments, as they relate to Kingston. The comparative environmental impacts of the alignments in relation to noise, landscape, heritage etc are set out on the document and the sensitivity of Kingston and its surrounding landscape is recognised.

Having the station to the north is supported by Cambourne Town Council. Various pressure groups, supported by our MP, have campaigned for an entire northern route connecting with the Cambridge North station. EWR rejected the latter option as too expensive and incompatible with the eventual goal of creating a freight line from  Harwich and Felixstowe.

Kingston Parish Council and many residents have previously written in support of the northern route and also supported the Wildlife Trust in their efforts to prevent a railway beside the Bourn Brook. What we seem to have now is a compromise that provides Cambourne with a station to the north and EWR with a direct connection to Cambridge South station.

The “emerging preferences” would be 2.4 km (1.6 miles) from Kingston at their closest points and the track would almost certainly be in a cutting as it descends from 72 m at Childerley Gate to 19 m at the Bourn Brook. There would have to be a road bridge between Toft and Comberton, as level crossings are no longer an option for new lines.

If you support the “two emerging preferences”, please take this opportunity to do so, or pass your concerns about the southern alignment to the Parish Council who are preparing their response. Among other things we will be asking EWR for their assessments of noise levels and impacts on roads, landscape, heritage and wildlife and their mitigation proposals.  We will also use this opportunity to press the case for electric rather than the planned diesel trains.

Kingston Parish Council 8 April 2021 (with thanks to Paul Wright) 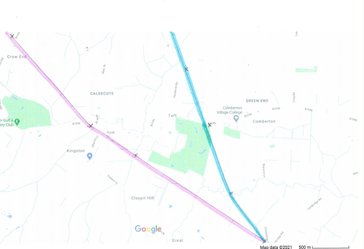 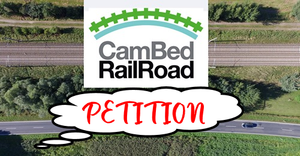 This is a petition that is of direct relevance to Kingston. You are urged to consider it carefully, and if you agree please sign it. The petition asks East West Rail to evaluate a more northerly route to create a transport corridor alongside the A428. This was not an option they offered in last year's public consultation but Kingston Parish Council, along with many local bodies, believes it should be investigated.

There is more information available on the Cambridge approaches website